Biogas runs through the DMT CarborexMS and the CNG station

“Our company, HRA, found its origin in 1992 with the Olympic Games in Lillehammer. We wanted to set an example as the ‘Green Olympic Games’ and started composting the food waste. Later five landfill companies worked together in full organic waste separation. That is how HRA started. Our Carborex®MS was built in 2013. We digest 15.000 tons of waste from different municipalities every year. After the anaerobic digestion of the waste, the biogas runs through the Carborex®MS and the CNG station. Directly behind the plant, we have fourteen CNG fueling stations for our trucks. They drive on it every day.

“Circumstances in Norway are remarkeble, it can be minus twenty degrees in winter time. So every solution with water is not an option. We went to Poundbury in the UK to see the first commercial biogas upgrading plant, the CarborexMS. Because it was new we didn’t know the lifetime of the membranes. But we were convinced very quick because there is no water or chemicals needed.” 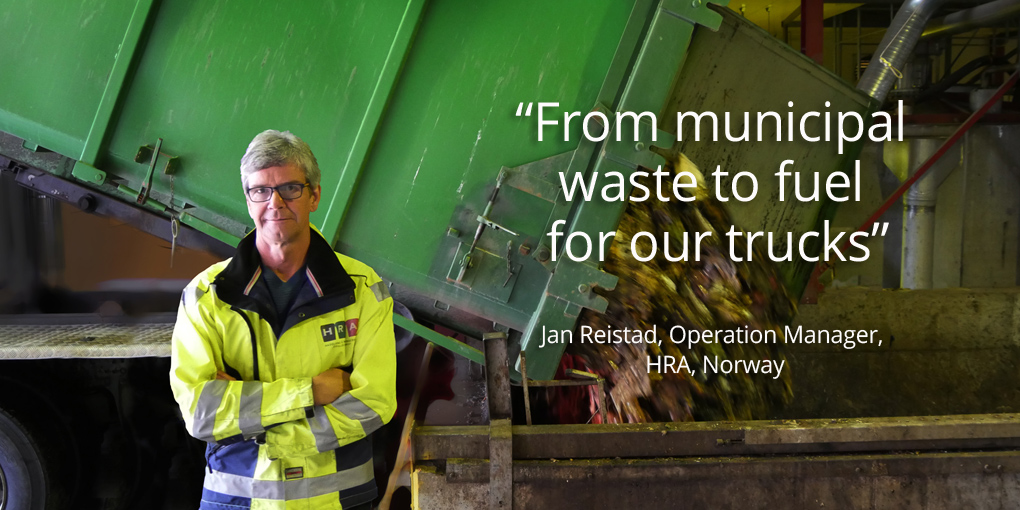 “The CarborexMS is easy to operate. I can start it and stop it myself: it is one push on the button. The screen inside the container shows the uptime and delivery of the plant. The membranes run 400 Nm3 per hour. The biomethane that comes out is compressed to 210 bar, and as such it is the ideal fuel for our trucks. We make green gas and CNG. With this installation it is all possible. The HRA-trucks take 25% of the fuel. The other 75% of the production we sell to Oslo area.”

“What can I say about DMT? I cannot think of anything that went wrong. In the time that we had negotiations about this project they were helpful in every aspect of the project. They have a great team of young technicians who worked together with local subcontracters during the building of the plant. It was built in three weeks. When something doesn’t run there is help within four hours, no matter what time of the day. No, I can’t think of anything negative.”

Jan has a long standing reputation in the biogas industry and has been with DMT for over ten years. Jan’s experience goes beyond and you will always find him at the forefront of European market development. Jan has a strong focus on developing key accounts and other commercial partners. Jan has a background in chemical engineering and a history product development.